A lasting reminder of the once thriving kauri industry on the Peninsula are the kauri dams of the Coromandel. Estimates of the number of dams constructed in the Kaueranga Valley near Thames alone range from around 60 to over 100, built across most streams in the valley. They were used to store water for washing felled logs downstream into massive log drives. Logs were also taken from the bush by bullock teams, stationary steam traction motors and by rail.
Kauri logging in the Kauaeranga Valley lasted 60 years, from 1870, during which 200 million superfeet of timber was removed. A superfoot is a section of timber one foot square and one inch thick — an average kauri contained 1,000-5,000 superfeet, the largest up to 7,000.

The biggest-ever drive in the 1920s sent 28,000 logs downriver. Around 30,000 superfeet of kauri was used to build Dancing Camp Dam. But while between 1,918 and 2,892 million feet of kauri was felled, it is estimated only 77 million feet (20percent) reached the booms. The remainder was lost, most of it smashed up in the driving process. (In the first drive over Billygoat falls, 100,000 feet of kauri went over but only 10,000 came through intact.)
To complete the destruction, huge forest fires often followed the kauri logging. One such fire was set by a sacked bushman, Racehorse Jack, in 1888. It burned three dams and a large area of forest in the Billygoat Basin. 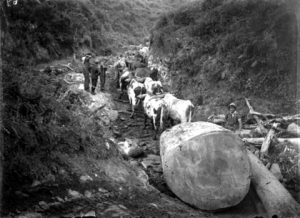 Ref. No. 1/2-021556 Permission of the Alexander Turnbull Library, National Library of New Zealand Te Puna Matauranga o Aotearoa, must be obtained before any re-use of this image.