Trees normally reach a height of 30m — occasionally 60m — with a normal trunk diameter of three metres, sometimes reaching seven metres. As a young tree (known as a ricker) the kauri has a narrow, conical shape with branches up the length of the trunk.

As the tree gains height these lower branches are shed. They are supported by a fleshy swelling which has a thin core of wood in the centre. If the branch dies, it is abscised cleanly, leaving only a small scar, if any, in the stem. 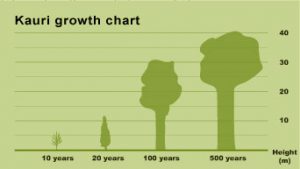 This way the tree is able to grow upwards among its siblings and shed branches as they get shaded out, as well as let go any climbing species, which might otherwise overwhelm the tree. If the branches get any thicker than about 50mm they cannot abscise but will gradually rot away if they happen to die. As a result the kauri is a relatively safe tree as far as falling debris is concerned. In this way the trunk grows steadily in diameter and height, forming a huge straight column, clean of branches. In the mature tree the top branches develop into a massive spreading crown, which stands out above other trees and dominates the forest canopy.

However even in the oldest trees the trunk is kept clean and free of epiphytes by the continuous shedding of thick flakes of bark of varying size.

This bark builds up over time into a large mound around the base of the tree, two metres or more in height.

This decays to rich humus, and is densely penetrated by the roots of the tree, giving the impression that the tree is growing from it. Kauri bark is fairly thick and exudes gum, which also flows copiously from any wound to the tree as well as from cones and even at times from branchlets and the bases of leaves.

The thick leathery leaves, with their parallel veins, are sessile and arise on the branchlets either alternatively or oppose one another. Leaves of young trees are lanceolate, 5-10 cm long and 5-12 mm wide; adult leaves are blunter and only 2 to 3.5 cm long. The kauri was sometimes referred to as the ‘widow-maker’. This was not due to falling branches but rather heavy loads of epiphytes falling off the trees as they were being felled … with the bark naturally shedding as described above, anything perched in the branches will fall freely if the centre of gravity changes.