The History Of Kauri

The kauri was first discovered by the 1772 expedition of French explorer Marion du Fresne. When the first Europeans came to New Zealand the northern parts of the North Island were covered in vast kauri forests, estimated at around 1,200,000 hectares in total. Today barely 4,000 hectares of original forest remain, the rest felled for timber or cleared for farming.

Initially the first kauri cut in the late 1700s and early 1800s were the isolated tall young trees (rickers) that grew near the sea. Their trunks were highly valued as replacement masts and spars for sailing ships. In November 1820 the first export load of timber left New Zealand on the HMS Dromedary… 98 kauri spars. However the kauri’s fame as a timber tree grew rapidly because of its massive volumes of attractive clean grained timber. For more than a century kauri would be the only indigenous species exploited on such a large scale.

The felling and milling of the great kauri forests is well documented elsewhere. Colourful tales abound about the rigours of bush life, and the skills of the hardy characters who felled these mighty trees and created ingenious dams to drive the huge logs downstream to waiting booms, ready for barging to Auckland.

Around 3000 kauri dams were built in New Zealand in the 19th and 20th centuries. Kauri driving dams were built by loggers to drive large quantities of kauri logs downstream from remote areas. While they played a major role in the destruction of the forest, they were also impressive engineering feats, built without drawings or detailed calculations, yet able to withstand the pressure of tonnes of water and kauri logs which were swept through with tremendous force when the dam was tripped.

From about 1830 onwards, teams of pit sawyers moved into the forests to cut logs into boards for the local and export markets. Kauri quickly became the preferred local timber by carpenters and ship builders because the wood was durable, strong, straight and evenly grained, generally free from knots and easy to work and nail.

As well as the timber, kauri was also prized for its gum, used in the production of high quality paints and varnishes. The process of “bleeding” kauri for their gum hastened the early death of many trees.
The first sawmills were established in the late 1830’s and soon there were numerous small mills cutting logs from the forests around the sheltered harbours of Northland, Auckland and the Coromandel Peninsula. These mills, powered by water wheels, and later steam, had far greater cutting capacity than the pit sawyers. Demand for timber continued to increase, especially with the onset of the Coromandel gold rush in the late 1860s and 70s, but industry expansion exceeded local demand and a depression hit in the 1880s. Many mills went bankrupt and in 1888 a group of Melbourne financiers bought out most of the surviving mills and formed the Kauri Timber Company, which became the dominant player in the industry from that time on. 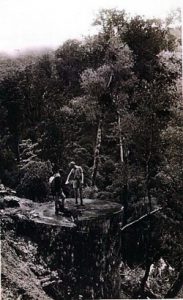 The Last of the Mohicans

This photograph taken in 1971 is the stump of one of the last – and largest – kauri to be cut on State Forest land on the Coromandel Peninsula.
It was cut in April 1970 by the Thames Sawmilling Company on the southern edge of the Manaia Sanctuary shortly before Sanctuary status was proclaimed.
It yielded 89.7 cubic metres of timber. Shown in the photograph are John Nicholls, scientist, Scion Research Institute, and Max Johnston, forest ranger.
(Photo courtesy of Max Johnston, Peninsula Environmental Practice)

The depression dragged on until 1897 when the last great boom period began. Already 75percent of the kauri forests had been felled, but the cutting rate accelerated again. 1907 was the peak year for production and export of kauri timber, after which a steady decline set in, only with minor amounts being cut in the last 50 years.

It is estimated that up until the beginning of the 20th century kauri was milled at an average rate of more than 236,000m3 per annum.

After the turn of the century, the kauri timber industry declined to an average rate of 3000 cubic metres per annum, but the rate of exploitation, coupled with land clearance and development policies at the time, had resulted in a dramatic reduction in the area of mature kauri forests. During the late 1950s and early ’60s the supply of logs almost ceased from private lands, putting even more stress on the remaining State kauri forests. 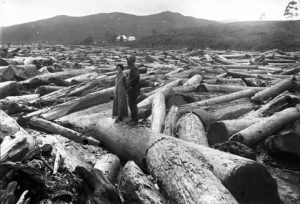 Kauri logs piled up near Coroglen after a log drive down the Waiwawa River.
Ref. No. 1/2-022204; G Permission of the Alexander Turnbull Library, National Library of New Zealand Te Puna Matauranga o Aotearoa, must be obtained before any re-use of this image.